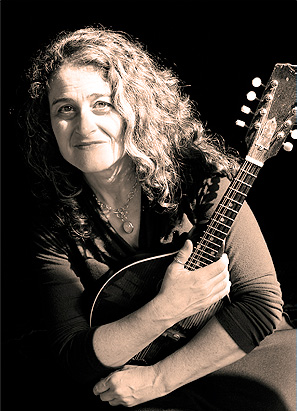 LOCATION:  This is a Free ZOOM online workshop. All levels welcome.

Tickets for this workshop are available on Eventbrite.

Learn how to put the pulse of Irish dance music into your playing.

We’ll explore three common forms in an hour of workshop time:  The Reel, The Slip jig, & The Hop Jig

For each form I’ve selected a tune for us to use as a fulcrum to explore the form (and also to enjoy for its own sake!)

I’ve made basic recordings of them and posted them here: https://drive.google.com/drive/folders/1lboWvWJGkktcfsYaThdpajH91TDIJJcX?usp=sharing

Before the workshop
To get the most out of our workshop, it would be great to have a basic grasp of the tunes, as I will use them to illustrate techniques and concepts for giving them “lift” varying your phrasing and bringing in ornamentation. We’ll highlight the unique things that the mandolin brings to the music.

“Some of the best mandolin playing in Irish music.”  —Dennis Cahill, Guitarist

Marla has performed and taught nationally and in Ireland, and was a featured performer at the 2018 Masters of Tradition festival in Bantry, Co. Cork. Her playing is featured on her 2020 album, “The Bright Hollow Fog,” the 2017 Noctambule release A Sweetish Tune, and The Morning Star, a duo CD with legendary Irish singer and bouzouki player Jimmy Crowley, as well as on the eponymous Three Mile Stone recording.

An experienced and sought-after teacher, Marla teaches private students and classes, online at Peghead Nation, and has been on the faculty of many music camps including The Swannanoa Gathering, The Mandolin Symposium, O’Flaherty Irish Music Retreat, Portal Irish Music Week, Lark Camp and others. Her instructional DVD has been a popular self-learning tool, focused on acquiring the foundational technique for playing Irish music on the mandolin.

A multi-instrumentalist, Marla is known for her musical settings of works from a variety of poets, as well as original tunes written in traditional forms. This work is featured in the duo Noctambule, her longtime collaboration with guitarist and husband Bruce Victor. Their earlier releases include Travel in the Shadows in 2013 and The Waking in 2015.

More about Marla at www.marlafibish.com

“Marla is a wonder on the mandolin; rhythmic beyond imagination, clear as a bell tone, great invention, lovely ornaments at just the right times and places, and a sureness and ease that allows the listener to relax and be carried away.” —Kevin Carr, Folkworks

Instead of paying us for this amazing event, we ask that you leave a generous Tip.
100% of your TIP will go directly to Marla. Thanks for supporting independent musicians.

Marla’s Tip Jar will be available during the workshop.