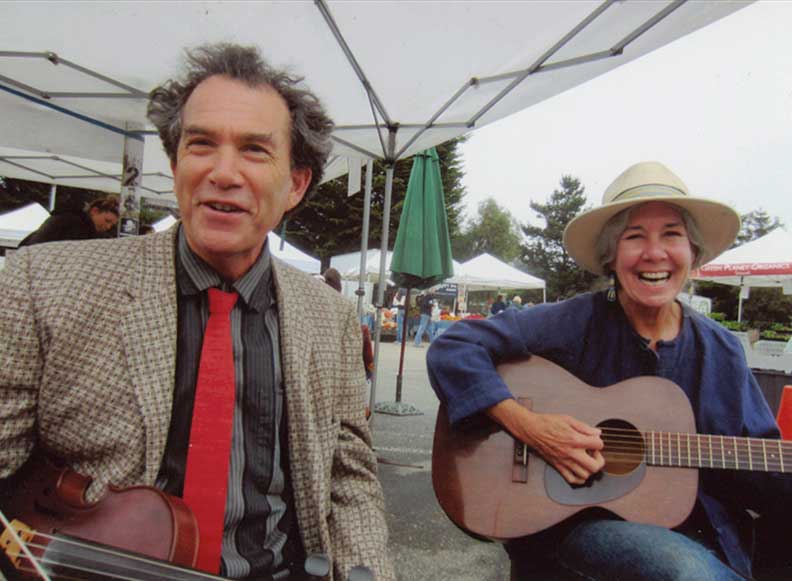 This is a FREE virtual workshop presented on Zoom.

Get FREE tickets at Eventbrite!

The Tohono O’odham fiddle music is European dance music seen through the lens and sensibilities of the Native American players. Paul Rangell, accompanied by Emily Abbink on guitar, will be teaching a sampling of these rhythms including a polka, chotis, mazurka, cuadrilla and a two-step.  Paul and Emily learned the tunes from local Tohono O’odham musicians, (a group of these musicians became known as the “Gu-Achi Fiddlers”)

Guitar players: Chords for all the tunes will be provided for each tune so you can play along.

Don’t miss this unique opportunity to learn about and play this wonderful, yet often overlooked, music.

Paul will be demonstrating the tunes on the fiddle, with Emily on guitar.

Mandolin, guitar, concertina, banjo players and other musicians are encouraged to learn the melodies so you can pass them along!

Emily Abbink & Paul Rangell play social music from the old world and new. After living in Albuquerque in the early 1980s playing southwestern music in New Mexico as half of Bayou Seco, they moved to Santa Cruz, California. There they learned the ballo lascio tunes brought by Italian immigrants to San Francisco, but have never have never lost the grounding connection to the Tohono O’odham fiddlers of Arizona and the magic and attraction of their music.

The music of the Tohono O’odham fiddle tradition evolved over approximately two hundred years as it passed from missionaries to the native inhabitants of the land of the Sonoran Desert. These tunes, which include polkas, mazurkas, chotis, and two-steps, represent a blend of European dance music seen through the lens and sensibilities of the Native American players

Paul will teach five tunes sampling of rhythms to include a polka, chotis, mazurka, cuadrilla and a two-step.

We do not read music. We will break down the tunes phrase by phrase and then re-assemble the parts. Then we will play the tunes at a slow tempo for all to join in and get on board. We hope to have time to share a few details of our experiences with these fine musicians.”

In the 1980-90s Paul and Emily were fortunate to spend time on the Tohono O’odham Reservation with a group of musicians who played their traditional dance music on fiddles, guitar and drums. They learned many of their tunes and keep them close at hand for performances and group sessions.

Known as the Gu-Achi Fiddlers, this unique quintet played mostly in their village for ceremonial and social gatherings. They were invited to share their music at the Festival of American Fiddle Tunes in 1991, a grand occasion. The blueprint of their sound in this remarkable band featured two fiddles in closely matched harmony (Elliott Johnson and Lester Vavages), forceful unadorned rhythm guitar (Wilfred Mendoza), snare drum (Gerald Leos Jr.) and bass drum (Tommy Lopez).

… more about Paul and Emily

The duo perform often on mandolin/violin and guitar in cafes, restaurants, markets, and gatherings in Santa Cruz. They also sharpen their trade with their two sons in the Rhythm Rangellers, a fiddle based band specializing in jigs, stomps, waltzes and bustdowns from New Mexico, Ireland, and other sources. Paul & Emily are founding members of the infamous roots band, Bayou Seco, and have performed in Italy, France, England, Burma, Hawaii, Canada, and Washington. You can find their CDs Tuesday Nights (2012) and Noche Azul (2014) on their website.